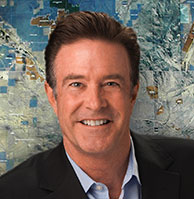 George H. Amos, III, known by his friends as “Hank,” is a fourth generation Tucsonan. He graduated from the University of Arizona in 1981 (with a double major in Finance and Real Estate) and is Chairman of the Board and CEO of Tucson Realty & Trust Co. Incorporated in 1911, over 100 years ago, Tucson Realty & Trust Co. is Arizona’s oldest real estate company specializing in commercial brokerage and property management. He has been awarded “Graduate” of the Realtors Institute.

Mr. Amos has been involved in all aspects of real estate. He was CEO of Southern Arizona’s leading luxury real estate firm (annual sales of $500 million) for 14 years in which his firm handled the marketing and sales of some of the top residential developments in Tucson. He is often asked to provide consulting services and consulted on Cabo’s latest premier luxury development, Quivera, located on 1,850 acres, including a planned Ritz Carlton Hotel and two Jack Nicklaus signature golf courses in Mexico. He has also consulted for the Arizona Board of Regents real estate holdings while serving on the board.

In addition, Mr. Amos currently has the state’s number-one ranked small (24 or fewer brokers) commercial brokerage firm in Arizona for 2013 (and in 2005, 2010), according to Arizona Business Magazine, and brokered one of the largest transactions in Tucson’s history. In his earlier years, he specialized in industrial and land deals and was consistently a top producer.

Board Membership: (Past and Present)

Member: (Past and Present)